The microscopic land and transportation interaction model framework and the estimation method for it are proposed. The proposed model consists of a land transaction by landowner based on random utility theory and an activity chain based on a dynamic discrete choice model. As an estimation method, we proposed a new recursive algorithm in which the results of each sub-model become explanatory variables. The proposed model is based on economic theory as well as previous LUTI models. They have only dealt with the interaction between land and transportation on a zonal basis so far. In contrast, the proposed model is formulated on a link level, and the submodels for both land and transportation are disaggregated. The empirical model estimation results show that the proposed method can remove the parameter bias in a reasonable time. We obtained this result by comparing algorithms that assume multiple behavioral equilibria with input land transaction data and activity-chain obtained from a survey of visitors in a local Japanese city. This paper explicitly shows how to a micro land-transport interaction model from three perspectives: formulation, data used, and empirical estimation methods. The proposed recursive model framework and algorithm have demonstrated their practical applicability to street-level policymaking. 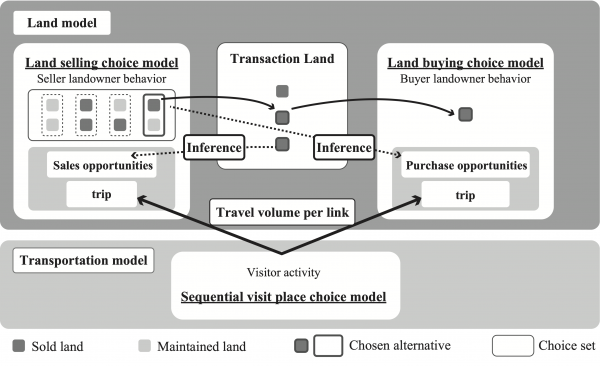